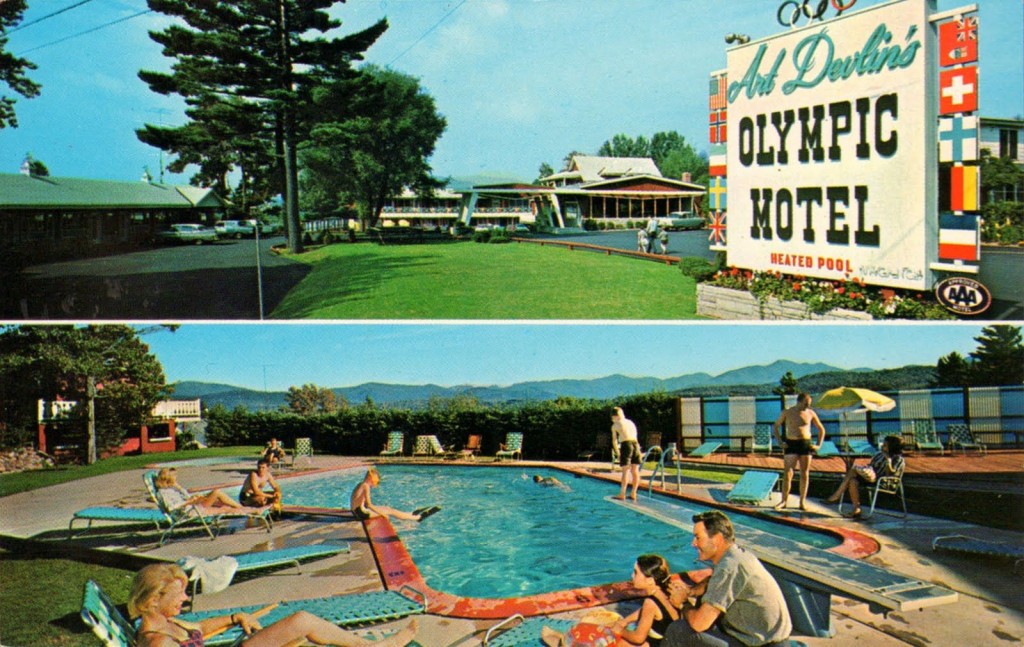 In the early 1900s there were 2 houses on the front of the property where the motel is now. The houses were both owned by doctors and shared a livery in the back yard. The livery had an apartment above it & was rented to John Deviln. John married Anna Donovan and on September 7, 1922, gave birth to their first son, Arthur Donovan. He was born in the apartment,as back then it was a luxury to give birth in a hospital.

Around this time, Dr. Trudeau made claim that living in the Adirondacks ( fresh air)  was the cure for TB. Many in the area, took people in who came here to be cured. Anna and John took in a TB patient, as a border, to help make ends meet. Shortly thereafter, Anna contracted TB but fortunately her immune system was able to fight it off. They took in another border (with TB) and she contracted the disease for a second time which took her life. Art was about four years old.

Sometime around the mid to late 20s the doctors purchased Model A Fords and no longer had a need for the livery and sold it to John Devlin. The strain of losing his wife and having to rear a young child proved to be too much for John. He suffered a nervous breakdown and was hospitalized. Art was sent to Westchester to live with Anna’s relatives. After seven years when John was back on his feet, he was able to bring his son back home. These years of separation from his dad and home were traumatic for Art. As a result, he was forever protective and appreciative of Lake Placid.

After serving in World War II, Art returned home and acquired the home shortly before his father passed away.

In the early 50’s Art met and married Helen McCutchen and they continued living in the house that Art was born in. December 1953 they moved from the second floor apartment to the main floor and started a family. They converted the upstairs apartment into 2 motel rooms.

The motel was named “Devlin’s Motel” as Art was still on the Olympic ski jumping team and any mention of his name would make him ineligible as an amateur. In 1960, Art made his 5th Olympic team but stepped down due to age and injuries and went with CBS as a sports announcer for one year. With Art no longer competing & his amateur status no longer an issue the motel was renamed to the name Art originally wanted, “Art Devlin’s Olympic Motor Inn”.  On top of the new sign Art put the Olympic rings. This turned out to be great timing as two years later the International Olympic Committee trademarked the Olympic rings making it illegal to use the rings without their permission but because Art had the rings on the sign prior to 1962 he was grandfathered.  The rings are still there to this day.

In the mid 1960’s Art was finally able to purchase the neighboring “Carey” property. Twenty more rooms were added bringing the motel to a total of 40 rooms. The timing of the expansion was good as Expo 67′ was in Montreal and many people made a stop over in Lake Placid on their way to the fair.

When the Olympics came to Lake Placid in 1980 Art decided to try to keep all 40 rooms open for the Games in February. Out of 40 rooms, only 8 were winterized (insulated). It just so happened that it was a mild winter in 1980  so things worked out. However, the week-end after the games pulled out, a bus tour rented the motel, it turned cold & we had all we could do from having the place freeze up.

In 1982 an apartment was constructed on top of the building on the left as you drive in. Art Jr. & his wife, Sue, moved in when they married in April 1983. In 1987 Helen & Art moved into the apartment & Sue & Art Jr. moved over to the main house & took over the day to day operations of the business. In 1989 Helen passed away, Art remained in the apartment until his passing in April 2004. Art came full circle at the motel having been born and died on the property. In memory of Helen, a close friend, Frank Loving, had a blue spruce planted in the front yard. After Art’s passing, Wes Moody, had another blue spruce planted as well. Blue was the favorite color for both, thus the reason for both trees decorated in blue lights in the winter.

In 1991 the property was almost sold to a developer who had plans for a strip mall. After much thought, Art decided against it & sold to Art Jr. & Sue on Jan. 1,1992. The property had become run down, out of date and was badly in need of restoration. For the next 11 years a cycle of tearing down & re-building in the winter months took place. During this process, Art Sr. was a wealth of information on ideas he had wanted to do originally could not due to financial and technological difficulties. One example would be the gardens that separate the parking area from the rooms.

Our neighbor, Bill Hulshoff was very instrumental with the project. He had great ideas & challenged us to make it a better place vs. just re-doing it.

The restoration was completed by the Motels’ 50th Anniversary, Dec. 2003. Art (Sr.) passed away 4 months later. Fortunately Art was able to see the property where he was born & started a motel completely restored before his passing.

Since then we have continued to upgrade & modernize the guest rooms, bathrooms & grounds.